Ebook: How Does Hydropower Impact the Environment in Canada? 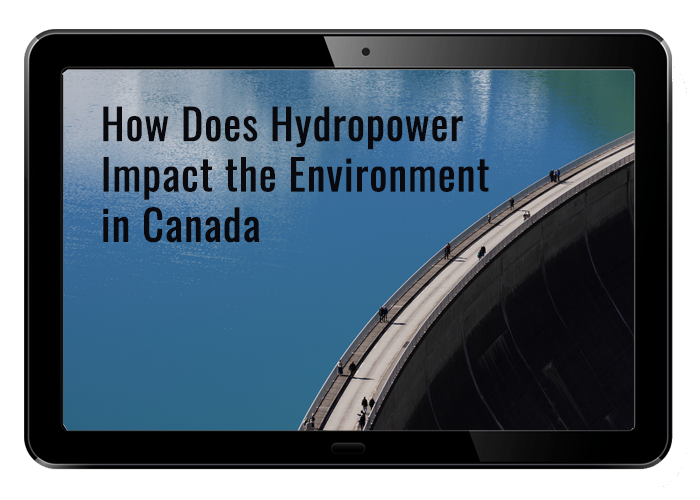 By 2050, Hydropower in Canada is Expected to Increase by 295%. What are the good and bad effects this will have on the natural environment. As the second largest producer of hydropower in the world, Canada also accounts for nearly 9% of the global water supply. Hydropower produces over 60% of the country’s electricity supply, while fossil fuels account for only 20%. The environmental benefits, but also the disadvantages involved, such as severe flooding should always be considered.

Being a source of renewable energy that is not involved in the production of fossil fuels or high levels of CO₂, these are some of the obvious benefits associated with the use of hydropower and other forms of renewable energy such as wind and solar power.

Some of the other benefits that dams have on the local environment are flood prevention and irrigation purposes. Most of the dams in Canada are multi-purpose dams that can be used for some of these purposes along with the formation of hydropower. Rapid snowmelt is one of the main reasons why flood control needs to be considered along rivers such as the Fraser River, with the snowpack in the Upper Fraser West mountain reaching about 264% above the national average.

Some of the negative effects of using hydropower are the costs involved and the time taken to build some of the larger dams such as he Centrale Robert-Bourassa, James Bay, Quebec, costing $3.8 billion and taking nearly 7 years (1974-1981) to build. The negative effects that hydropower can have on the environment, that are often less likely to be considered are:

Some of the solutions to deal with these problems have been included but this large number of possible answers continues to rise. Case-studies are one of the easiest ways to explain how these problems occur, what can be done and how successful certain projects have been. For example, the negative effects that the dams and reservoirs standing along La Grande and Eastman rivers are having on the local environment, concentrating on Eelgrass meadows, Chisasibi, James’s Bay, northern Quebec. These salt-loving meadows are now relying mainly on fresh water, since salt is no longer being properly dissolved. Also, how the reconstruction of the John Hart Generating Station, now over 70 years old, will make it a safe and environmentally friendly hydropower plant.

These positive and negative effects will be discussed in more detail, along with interesting case-studies such as the Whitehorse Fish Ladder and Dam, Yukon, a tourist attraction and also the longest fish ladder in the world.