Ebook: What is a Contract Worker & whose responsibility are they? 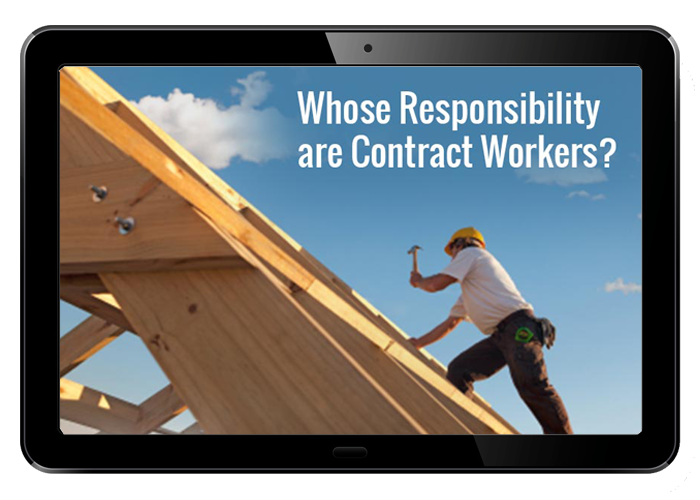 What is a contract worker? Contract workers are hired for a specific amount of time, chosen for distinct skills and a level of experience which must carefully be decided on before a new job is offered. For a job which might only be set for several weeks and must be finished on-time, the importance of determining all the skills required and hiring the most suitable person for the job is extremely important, compared to a long-term employee, who may be given months to settle in.

Contract workers must always be correctly classified, it is also essential that employees are never referred to as contract workers. They are obligated to some rights which contract workers are not given, such as health and disability insurance. When thousands of programmers and computer engineers were misclassified as independent contract workers in the 1990s, Microsoft were forced to pay $97 million in penalties and legal costs.

Although contract workers are not given certain rights, employers must always be aware of the rights that they still are obligated to possess. They always have the right to be in a safe working environment, provided with suitable measures for fire protection and first aid, without exposure to loud noise or any ionizing agents, with a manager who always behaves safely themselves.

Many employers still seem to believe that they hold no responsibility at all for the health and safety of contractors and this could result in a penalty. For example, in 2006, a Canadian landscape contractor was crushed to death by an employer driving a backhoe which was 30-years-old, with no braking capacity that was not provided with regular maintenance. The employer was considered responsible and went on to be convicted of criminal negligence resulting in death.

Any confirmed work history and skills should always be examined to make sure that their abilities are correctly identified. Any projects they have been involved in can also be investigated, examining their workmanship, making sure that their work was successful, and clients have been satisfied with the skills and level of experience mentioned.

With general contractors being one of the most difficult positions to fill in many countries, even if a qualified contract worker has been difficult to find, other workers should always be inspected. They may not be appropriate for the job, but other skills which should be added or replaced by different ones might be noticed, making a job description more accurate.

Download the eBook “What is a Contract Worker and Whose responsibility are they?” to learn more about: