Case Study: Orientations on Goldcorp’s Red Lake Site – Before and After

Goldcorp is one of the world’s largest gold production companies with operations in Canada, Mexico, Central and South America. Since its inception Goldcorp has achieved significant growth, industry recognition, and numerous awards. Goldcorp employs over 15,000 people, and was ranked among Canada’s Top 100 Employers in 2016. In the same year, they were named one of Corporate Knights magazine’s Best 50 Corporate Citizens in Canada.

Not surprisingly then, Goldcorp invests significantly in the health and safety of not only their direct employees, but also their contractors. Mines are challenging environments to manage from a safety perspective, with risks presenting themselves in the forms of physical, chemical, biological, ergonomic and psycho-social hazards. However, the industry has seen declining accident and fatality rates over the past 20 years, a trend strongly linked to stronger regulations, safer machinery and an improvement in orientation procedures.

GoContractor recently interviewed Joel Campbell, who is a Training Coordinator at Goldcorp Red Lake Gold Mines. According to Campbell, the company’s safety vision of “Safe Enough for our Families” guides their approach. “It’s simple—we believe that if an employee considers a mine to be safe enough for his or her family, then he or she will ensure it is safe enough for Goldcorp’s collective family.” Goldcorp sets clear expectations with workers and supervisors that everyone hold themselves and others accountable for fulfilling those safety expectations.

Of course, this can only be achieved when the appropriate tools and training are provided. Since 2015, Goldcorp has been working with GoContractor to manage contractor orientations and safety training through their customized online platform. Campbell and his team have developed four programs on the GoContractor platform that address multiple levels of onboarding, as well as a safety program for their direct workforce. Nearly 1,000 workers are currently managed through the GoContractor platform, wherein they register their personal details, identity and qualifications, as well as complete site-specific orientations. Some contractors choose to complete the process through a desktop computer while others do it through their smartphone—the choice is theirs. The major objective is to ensure that everyone on site has received a consistent safety orientation and is sufficiently qualified to do the task at hand.

Orientations on the Red Lake Site: Before and After 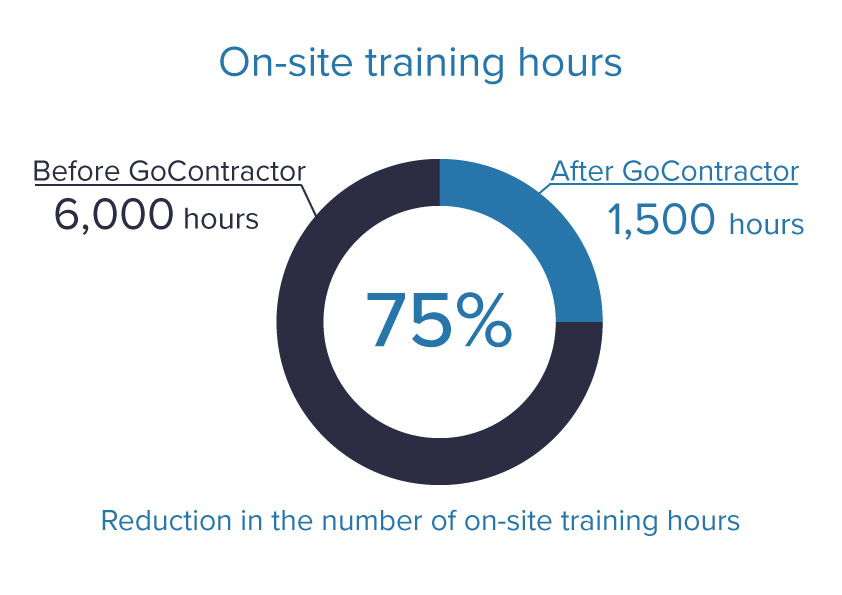 Prior to using the GoContractor platform for their workforce on the Red Lake site, Goldcorp had to spend 6,000 hours on trainee orientations (750 people, 8 hours each). After deploying the GoContractor solution, the company saw a 75% reduction in the number of on-site training hours (down to 1,500). Effectively, 5-6 hours of training can be done via GoContractor before their trainees come to the mine site. When they arrive, they are only required to do an additional 2.5 hours.

From a logistical perspective, the training department could allocate no more than 50 days in the calendar year where they could use rooms big enough to accommodate safety training sessions. After switching to the GoContractor platform, their trainees had greater flexibility since they could do their training any time, on or off-site. The safety department now allocates up to 200 days within the season while trainees can take their courses online. To sum it up, this equates to a 75% ‘rate of flexibility’ for the safety team to manage their workforce.

Using an average hourly rate of $30 to train people across numerous disciplines and safety modules, it costs $240 for an 8-hour day. What Red Lake Site pays now, after switching to GoContractor, is only a fraction of that. Considering that the company does more than 700 courses per year for their Red Lake site trainees, they now spend less than 50% of what they would have spent should they have chosen to stay with the traditional model ($9,100 vs. $21,000 per year).

Overall, Goldcorp’s Red Lake site Gold Mines have embraced technology as one of the key enablers to achieving the high safety standards they have set for themselves. Before GoContractor, they used a manual process of supervisors approving the documentation of each individual contractor, followed by classroom facilitation of the orientation. This was challenging because there were large volumes of contractors coming and going, and the turnover of contractors was high, so the orientation was adding a significant cost. Although they tested a program which was built in house for approximately 12 months, they opted for GoContractor in the end due to the flexibility it offers (in terms of configuring to company needs), as well as the high potential for cost savings.

From Face-to-Face to Digital: How The Miller Group rapidly implemented online orientations to keep infrastructure projects moving under COVID-19 with GoContractor About The Miller Group For […] read more