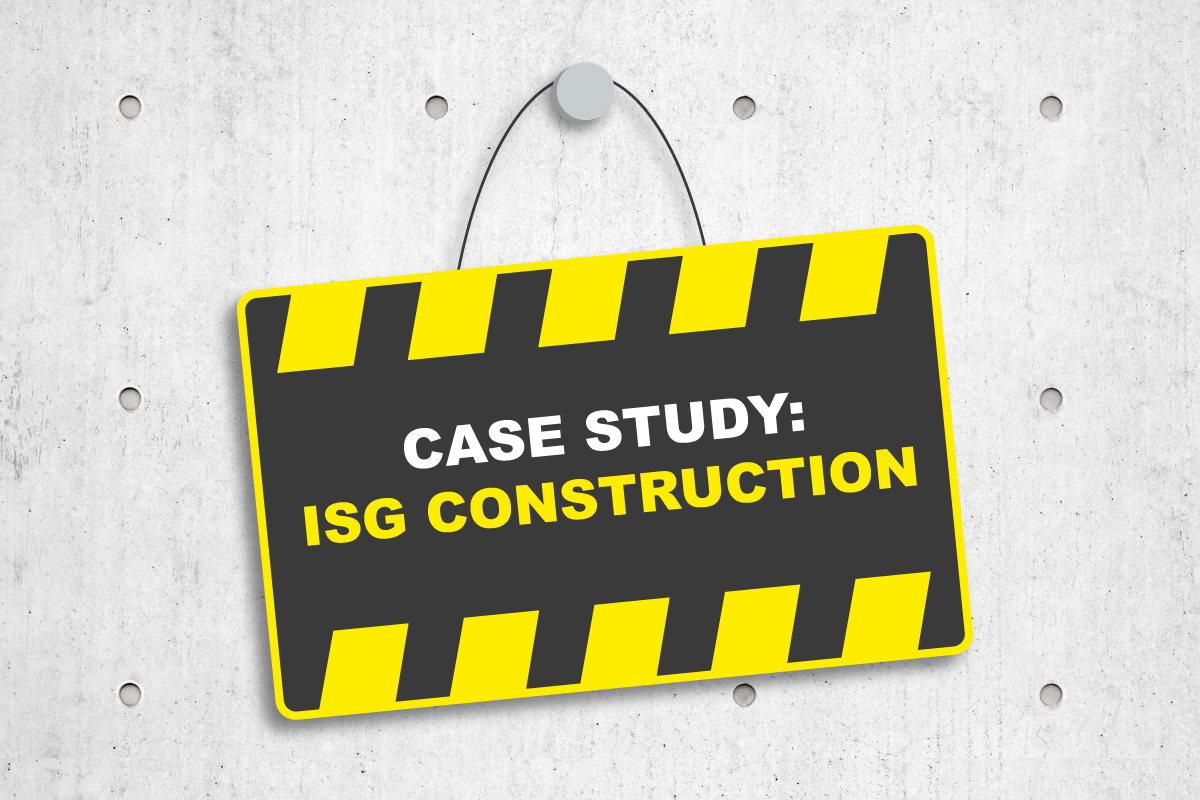 For ISG, one of the world’s leading construction services companies, their ability to undertake hundreds of orientations, onboarding new employees, and safely store important worker information during the outfitting of the new UBS headquarters in London was poised to be a monumental task. The outfitting is one of the largest outfitting contracts ever awarded at £125 million, and is due to last for at least another year. ISG’s main job is to deliver approximately 700,000 sq ft of “high-specification commercial space” including trading floors, office space and an auditorium. UBS, currently the biggest bank in Switzerland, is poised to consolidate its London trading operations within the building once work finishes. With a project this large, it obviously requires a serious amount of manpower- over 3,000 to be exact- and an orientation process that can ensure the project goes off without any major issues.

What the team at ISG technology needed was a platform that could handle their safety orientations process, and more importantly, be able to manage and store the thousands of documents related to health and safety training during the course of the project. When Steve Atkins, the Project Manager for the UBS project, undertook the task of operating the project, he wondered what this platform would look like and if it could be integrated along with their existing process. Furthermore, if an incident was to happen on site, Steve’s team needed to be able to react quickly, with instant access to medical and orientation data.

Thanks to Steve, we found out how GoContractor helped the team at ISG technology wise to create health and safety orientations for onboarding new employees that are unique to their culture and environment they work in. We’ll look at how our platform was used to allow workers to complete the registration process before entering site, upload documents and pictures, and take their orientation training before day one.

ISG’s orientation process included a number of issues that were proving problematic for the company. Most notably:

Before ISG started the process to look for a suitable alternative for their orientation process, they had a process that wouldn’t be suitable for the UBS project. This process relied heavily on site managers and required workers to be orientated once they arrived on site. This presented a number of problems for the team, more notably, the amount of time it took for documentation to be filled out and the length of onsite verbal orientations “which would take about 35-40 minutes,” according to Steve. As well as this orientation process, ISG had to gather contractor and worker information manually, meaning all of the files were kept in physical folders on site. Due to the continuously expanding nature of the project, this process was causing significant strain.

The team began to actively seek alternatives for conducting their health and safety training. They liked the idea of designing an onboarding program from a blended perspective where both online and face-to-face methods of orientations could be intertwined. “We were looking to try to cut down the time frame of orientations, which was drawing on our resources on a daily basis,” said Steve. Although ISG had plenty of construction managers on site, their time was best spent monitoring the safety on site and managing risk, rather than delivering hours of training on a daily basis.

At this point, it was becoming clear that GoContractor could offer the right balance of flexibility and control for ISG helping them design an onboarding program. Not only could it solve the problem of health and safety orientations, it would also store worker details securely. With the UBS project about to get off the ground, it was important that the team settled on an online solution that was also reliable and cheap and a decision was made to buy our platform. “ISG is forward thinking about IT,” said Steve. “We believe it’s more efficient, that’s why we believed that GoContractor was the right fit for our company.” The company immediately began using the platform for their two main pain points, safety orientations and the gathering and storing of worker information.

The team found that, even though content is delivered online, knowledge was still retained. “Orientations can be quite long, and some people may lose attention a little bit,” said Steve. Which is why they chose to put some of the process online, which gives them the ability to ensure workers understood the information, and that there weren’t any gaps in terms of the retention of information. This is achieved by asking three types of questions including:

For ISG, using GoContractor, alongside their existing orientation process has been a very beneficial purchase. It’s an onboarding training process that “reinforces” the importance of “health and safety training” at ISG, and ensures all of the contract workers on site are properly trained and safe. In one incident a worker, who had a previous medical condition, fell ill on site. The team immediately went to the platform to seek information on his medical history and passed that on to the ambulance service.This process would have taken a considerable amount of time under the old onboarding training process. To date, ISG has conducted over 3,000 sessions on our platform, using the following features:

Mandatory Document Upload – This feature allows companies to request copies of documents and certificates from workers. They can also add an expiry date to them, the expiry date will then be tracked and the administrator or worker will be notified. They will also be asked to upload fresh copies of documents when applicable. The most common items to be downloaded include: A copy of CSCS cards, OSHA cards, Safe Pass, and Driver’s Licenses.

Picture Uploads – The picture upload option is another feature which allows workers to upload their pictures. This feature can be turned on, or off by the administrator and can involve uploading instant selfies, passport size photographs, or existing pictures. The photograph will be then transferred to the user profile, and will be visible on the certificate too. This process makes it easy for your security to check the identity of workers before they come on site. 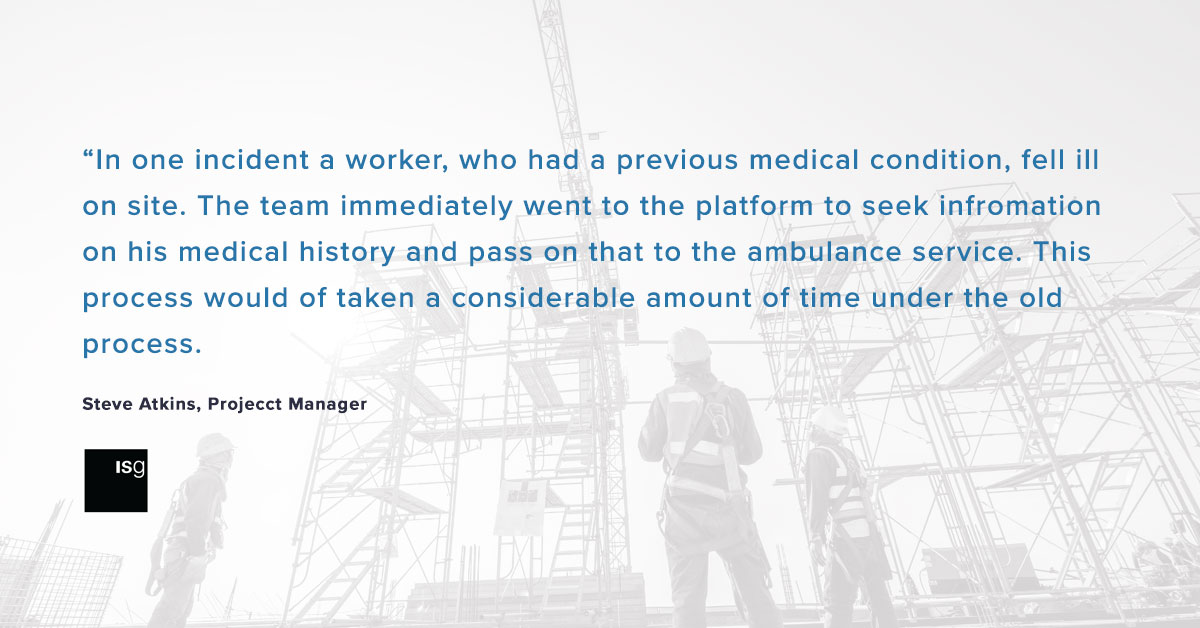 ISG still holds morning pep talks, designed to “reinforce key points”, so as not to lose the human element of their safety culture. GoContractor has helped them save thousands of hours in orientation training and administration, as well as having important data stored securely and accessible at the touch of a button. “Where before GoContractor, it would have taken half an hour to do an orientation, now the actual orientation time is down to between 15 and 20 minutes,” said Steve. “Now we are more efficient in collecting worker information in advance and also store it in a better way than A4 folders.” Orientation administration now takes only 40 minutes a day and requires only one person to oversee the whole process, even though thousands of people are coming and going on a daily basis.

From Face-to-Face to Digital: How The Miller Group rapidly implemented online orientations to keep infrastructure projects moving under COVID-19 with GoContractor About The Miller Group For […] read more