Football Stadiums in the U.S. host the highest average audience of any sports league in the world.

Yep, you heard that right. Averaging 67,591 fans in attendance per game, the NFL is the most popular sporting event to attend in the U.S. And with so many fans, it’s no surprise that many stadiums both in the NFL and NCAA are under constant expansion to hold a growing number of fans. Even more impressive, many stadiums are even being replaced completely by new builds.

Today we’re looking at 10 notable NFL and college football stadiums that deserve major respect– these stadiums have either stood the test of time or break records in innovative construction.

1. Everything IS Bigger in Texas: America’s Football Team 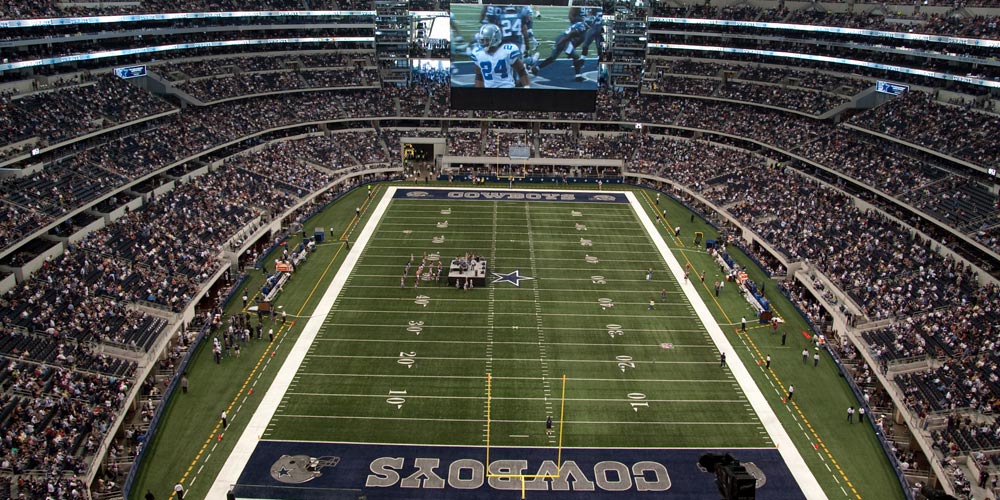 The Dallas Cowboys opened their new stadium doors in 2009, replacing the former Texas Stadium. Before deciding to build their new football stadium, the Cowboys leadership toyed with the idea of renovating Texas Stadium, but decided to build a new stadium that could hold more fans in an effort to drive more revenue. In the year it opened, this new stadium held a record-breaking crowd of 105,121 when the Cowboys played the New York Giants.

When it’s not game day, or in the off-season, AT&T Stadium serves as an event venue for concerts, basketball games, college football contests and rodeos. The football turf field was made by Hellas Construction and the Convertible Turf System can be removed to host some of these events.

2. Keep Your Eye on The Clock 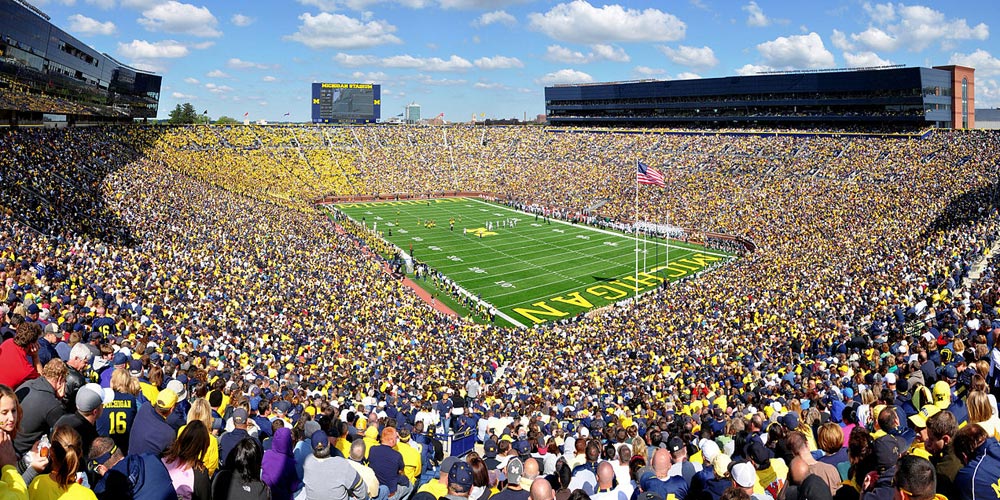 Home to the Michigan Wolverines (NCAA), the first game took place here in 1927 holding over 40,000 attendees. It was originally designed to seat 72,000 fans and has been under constant expansion ever since. Crowds coming to watch this college football team have since reached numbers of over 115,000.

This was also the first stadium to use electronic scoreboards to show official time, when they were installed at each end of the football stadium in 1930.

In 2009, a $226 million renovation project made Michigan Stadium the largest college football stadium in the US.

So …. if you ever wanted to parachute into The Big House ⬇ 👀#GoBlue | #USASOC pic.twitter.com/907vKrioJd 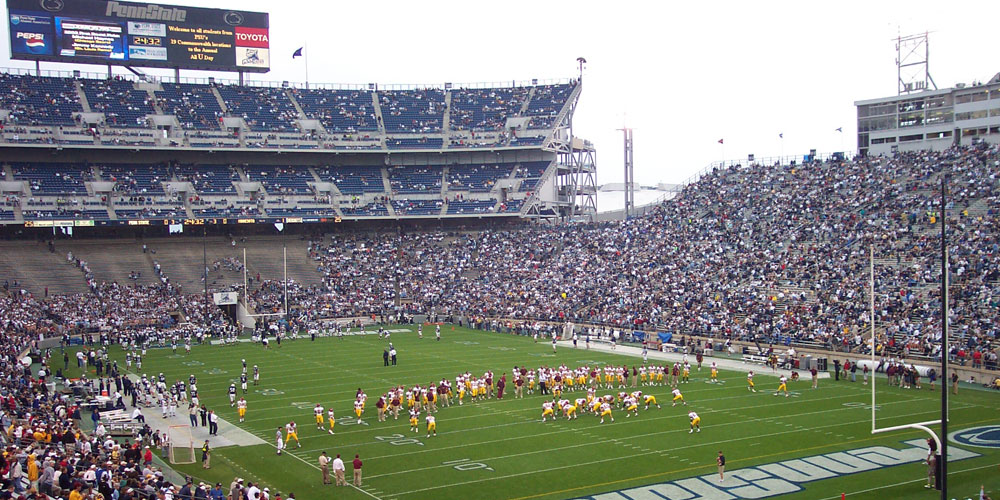 With some parts of this stadium dating from 1909, it was built after Penn State’s stadium (1909-1959) was dismantled. Home to the Penn State Lions college football team, this stadium was moved to the east side of the campus and rebuilt in 1960, becoming Beaver Stadium.

Beaver Stadium is once again awarded the “Best Stadium Atmosphere” in all of College Football by Kirk Herbstreit.

***pretends to be shocked*** pic.twitter.com/U7NbO6ov7X

4. The Most Efficient: Two Teams, One Home 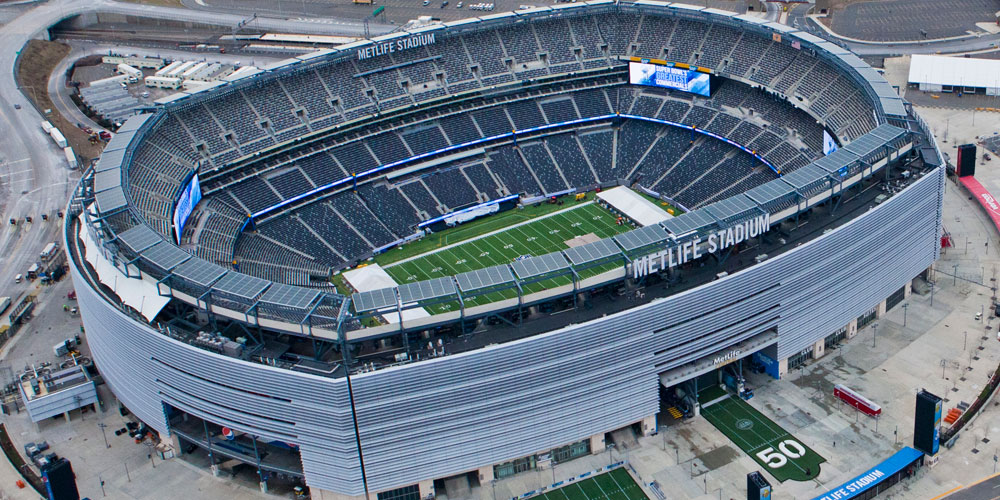 When it first opened, this stadium was the most expensive one ever built, costing $1.6 billion. Powered by a ‘solar ring’ of over 1350 solar panels it is twice the size of the Giant’s Football Stadium it replaced in 2010. Yet, it consumes 30% less energy.

Holding seating for over 82,550, this is the only stadium acting as home to two NFL teams, the New York Giants and New York Jets. Because of this, the field turf is changed often to display each teams’ shield. Machinery is also used to reach flagpoles and lighting, which needs to be changed to green then blue and back again.

To change the end zone, six 10,000-pound panels that make up each side, need to be changed using a forklift.

Our team is hard at work getting ready for #BUFvsNYJ, switching from a soccer field to football in less than 48 hours! Swipe to see some of the around the clock transformation 👇 pic.twitter.com/73IB7uoZYA 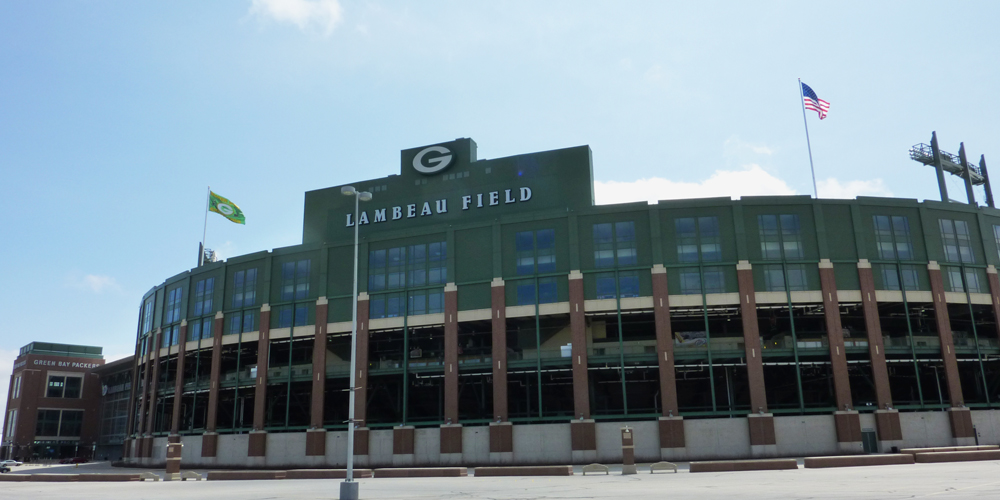 The seating capacity of this football stadium has more than doubled since it first opened in 1957, reaching a crowd of 81,441 in 2017. There was talk of replacing the stadium but between 2001 and 2003, a massive renovation took place. This added almost 12,000 seats, expanding the main concourse, adding a new upper concourse along with ramps and elevators.

The Green Bay Packers have still sold out every game since 1960. It is not the oldest NFL stadium but holds a record making it the longest continuously occupied stadium constructed specifically for the NFL.

This was my son's first (and by far not his last!) trip to Lambeau Field last year! This will be my husband and I's first time in 6 years we are not getting to go to a Packer's game 😪 pic.twitter.com/L48tb8oo8v

6. Chiefs Tribute to The Chief 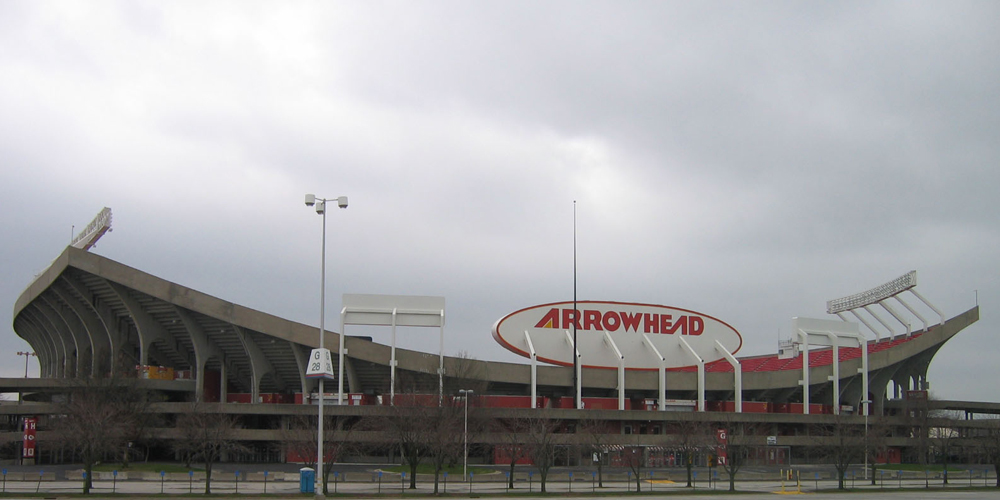 Home to the Kansas City Chiefs, this stadium first opened in 1972. Seating capacity hasn’t risen but $375 million was spent on renovation in 2010. The renovated football stadium now provides luxury suite owners with the chance to sit outdoors on ‘horizon level’ seating. It also features the Chiefs Hall of Honor, a tribute to Lamar Hunt, principal founder of the American Football League. Seating capacity now reaches 76,416.

This stadium was built for the sole purpose of football games and the alarming weather conditions, so much so that $2.2 million was spent on an under-field heating unit in 2016.

I love the feeling in Arrowhead stadium when it comes to loud it becomes chiefffs pic.twitter.com/FBfPzpqDVp

7. Accessible From Any Mile 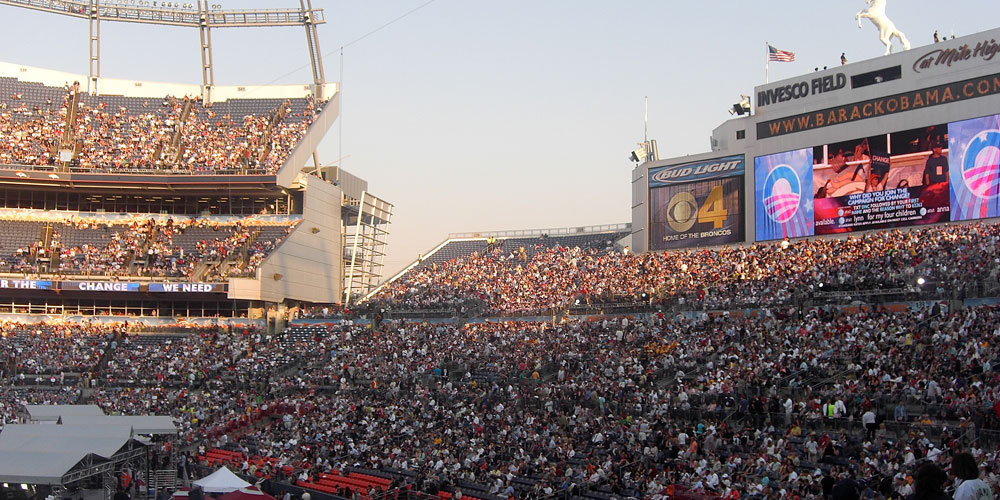 Built in 2001, this stadium was made to replace Mile High Stadium. With a seating capacity of over 76,000,since it opened every Denver Bronco’s (NFL) home game has been sold out. It was named Mile High because the city stands at an elevated height of 5280 feet.

A six-year sporting venue upgrade program took place in Denver and venues such as the stadium, Coors Field and the Pepsi Center were constructed with the aim of being easily accessible. This football stadium sits along Interstate 25 and close to Colfax Avenue. A light rail system is also positioned to serve the stadium. 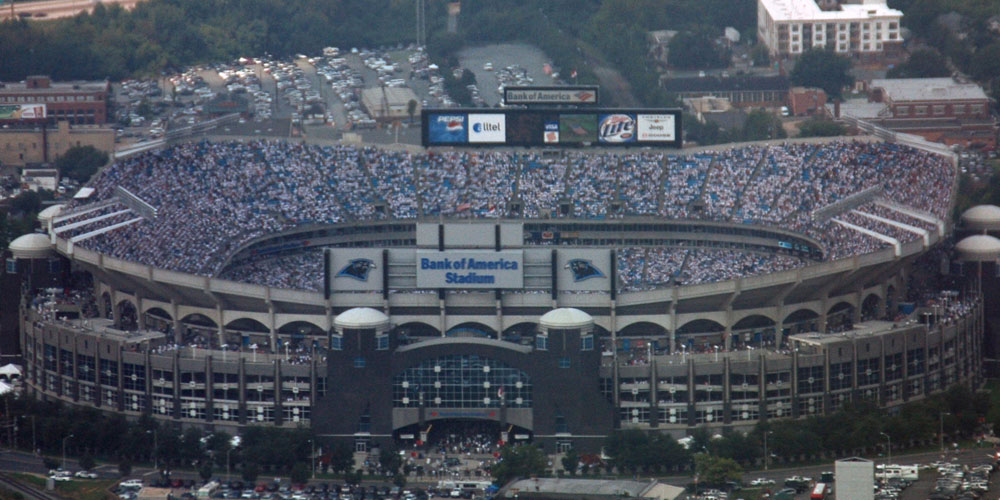 With a seating capacity of 75,523 (2017) and home to the Carolina Panthers (NFL), when this stadium first opened it was named the Ericsson Stadium. In 2004 the naming rights were bought by the Bank of America.

This stadium was designed specifically for football. With three entrances guarded by six bronze panthers, it has been externally mentioned as resembling a ‘fortress’, with three huge main entrances combining the team colors of black, silver and blue.

Made a quick pit stop at Bank of America Stadium pic.twitter.com/5FUZgw8dba 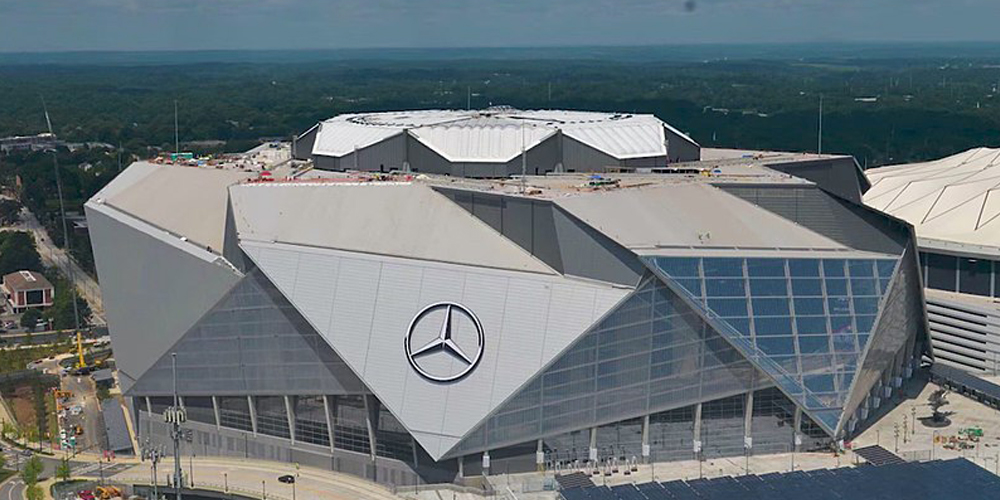 While this stadium opened in August 2017, with a Falcon’s pre-season game, work continued to construct a retractable roof which was finished in July 2018. This is one of the five NFL stadiums holding a retractable roof.

A seating capacity of around 76,000 was reached. In 2017, this stadium claimed the record for holding the largest video board in the world at 63,350 square feet.

The opening date had to be postponed three times, due to the complexity of this retractable roof made up of eight separate panels.

"Halo Board" at @AtlantaFalcons Mercedes-Benz Stadium is over five stories tall & 1,100 feet around. Can show as many 8 different TV feeds pic.twitter.com/1Wo734W046 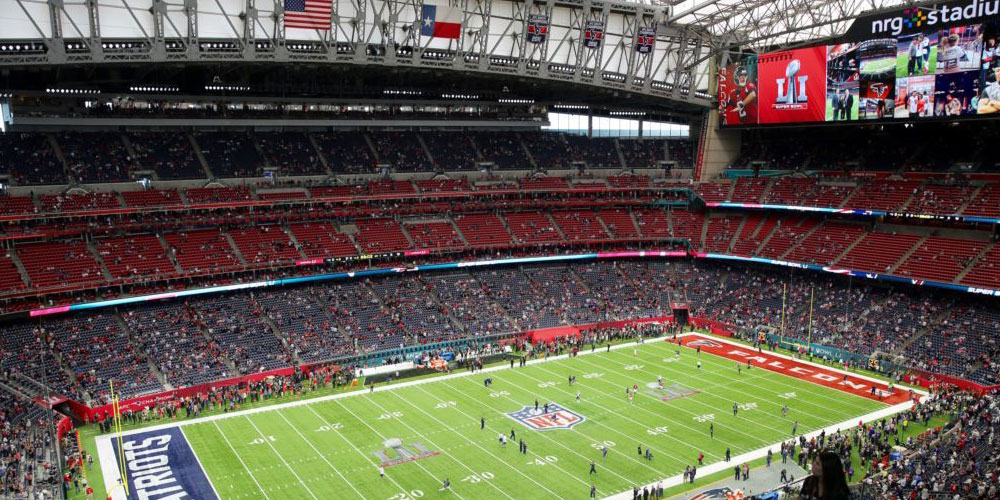 First opened in 2002, known as ‘Reliant Stadium’, this changed to NRG Stadium in 2014, after it was bought by the energy company. Home to the Houston Texans, this was the first NFL facility to be supplied with a retractable roof in 1997, although the football stadium almost never opens its roof on game days. It was also the first professional stadium in Texas to be fueled by solar power.

It is part of a group of sites, together known as NRG Park, that includes NRG Center, NRG Arena and NRG Astrodome. With a fabric roof and extensive areas of glazing, this stadium has been built so it appears to glow.

The first major renovation was required in 2008, after hurricane Ike hit. Damage caused part of the roof cladding to be taken off, with wind and water damage postponing upcoming games.

It took Lady Gaga to get the roof open at NRG Stadium, bless her heart: pic.twitter.com/1lVTS1yvxJ

Reading Time for Construction Document Management article: 5 mins 20 sec Positioned at the heart of every construction project, your role as safety manager is more […] read more

8 Apps for Construction to Maximize Productivity and Save Time

8 Apps for Construction to Maximize Productivity and Save Time

Apps for Construction Reading time: 3 min 48 sec Digital transformation is more than a buzzword across the construction industry– demands are pushing professionals to utilize […] read more