The hard-hat industry, along with a lot of other industries, is increasingly reliant on contingent workers as the primary pool of labor. Contractors have a number of advantages, including specialization, cost benefits, the ability to upscale faster and far greater flexibility than is possible with a traditional workforce. However, using contractors brings its own host of problems regarding logistics and managing a workforce, which is a difficult and complicated job. It is more important than ever for an employer to put in a system that can manage worker behavior in an efficient way. Where once this process was done on paper, companies are realizing that everything can be made much simpler by using an online tool for their contractor onboarding.

One of the most important things involved in managing contractors is ensuring that they all have the required documentation and that their documentation is up-to-date. It is a mandatory requirement for contractors to have documents, such as an Occupational Safety and Health Administration (OSHA) card in the US or a Construction Skills Certification Scheme (CSCS) card in the UK, that show they have the necessary health and safety training to work on a construction site e.g. an OSHA-30 card shows a worker has done 30 hours of training in construction safety. Failure to have proper documentation can have serious repercussions for workers and employers alike, with fines for each citation running up into tens of thousands of dollars.

The new Traffic Light feature on the GoContractor online contractor management system makes easy to manage worker behavior for any company administrator. The feature also keeps track of worker documentation, checking that all contractor’s documents are valid and up-to-date. The feature uses a Red/Amber/Green color scheme to represent worker behavior and the status of their documentation. For example, if a contractor has an expired OSHA card, then their status will be set to red and they will not be allowed on site. Employers and contractor managers will then have the information to determine whether a worker should be allowed to enter the site. One of the reasons the feature was created was because a number of companies totally banned smoking on site and workers who are caught are not allowed to return. This was just one of the examples that inspired GoContractor to build the feature.

What do the colors mean?

The meanings for these come from the colors of a Traffic Light signal but they are not set in stone. These are just suggested interpretations for the lights; you can decide how your company chooses to interpret the lights. The Traffic Light Feature comes with the contractor manager license type and companies are encouraged to use the system in the way that best suits their needs.

All workers start off at green by default, meaning that they are permitted to come on site. Automated color changes are tied to mandatory documents that either the worker has uploaded or if you have the contractor management feature turned on in your account, a contractor company’s mandatory document.

How to use the Traffic Light feature

To check a worker’s light status, you go to Users. You will see icons to the left of a user’s name, green, amber/yellow and red icon. An important thing to know is that Icons have specific designs to ensure that the feature will work for those who are colorblind. If you click on the question mark icon you can filter results by these statuses. If you want to see what problem is causing a worker to have a red or amber light, just hover over a user’s icon. By doing this, text describing the problem will appear, e.g. mandatory document has expired for the user and the contractor company, or a worker has been manually limited to amber.

To see the status of a user’s mandatory documents, you click on the profile button (left of the assign button) and go the general section which shows the document that has been uploaded and the expiry date. When a user document expires, both the user and the company admin receive emails letting them know that they’re documents have expired. 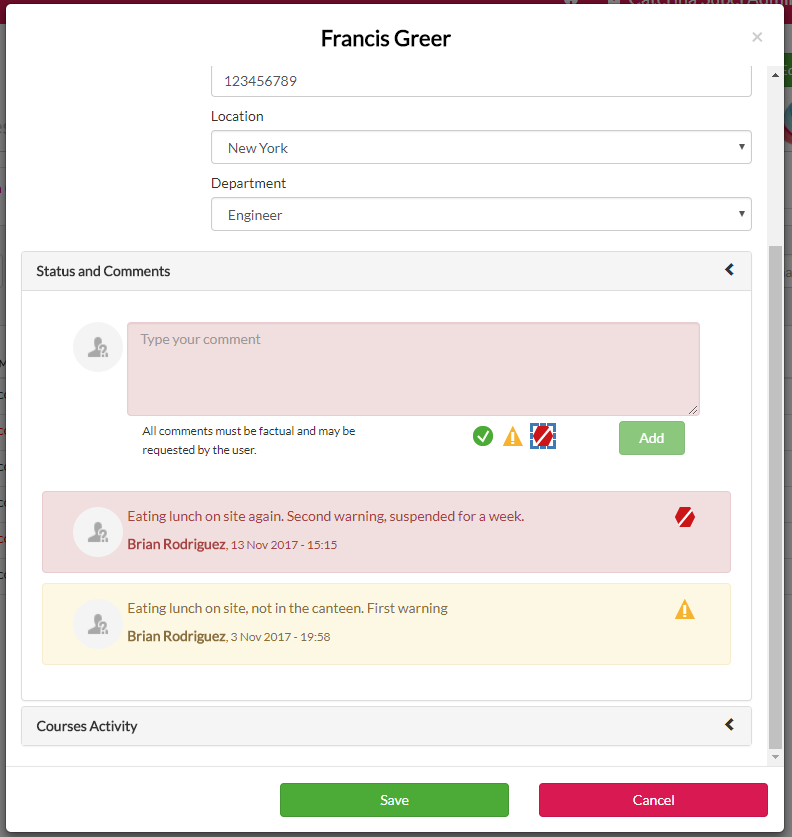 Go to the Reports Section and go to Dynamic Reports. Once you pull a user report, you can add a filter for RAG (Red, amber, green) status. This allows you to pull a report using the Traffic Light filter e.g. pull a report for all workers listed as red. This gives a report in an excel spreadsheet which also includes the contractor company name and the current personal note for the user, so that if they were manually changed to red, you can see why.

Managing a large workforce made up of contractors is a difficult but vitally important aspect of any project. An employer needs to be sure that workers have the proper documentation and that the correct practices are being followed by workers on site. The new Traffic Light feature is a practical addition to the GoContractor online contractor management system that allows for powerful and simple managing and tracking of worker behavior, making projects safer and more efficient. One important thing to note is that this feature is only available in the contractor manager account.

If you’ve ever worked on a construction site in the UK, you have probably come across CSCS cards. The cards are issued by the Construction Skills […] read more